WHAT IS CIRCULAR ECONOMY?

For many years, society has practiced the linear production route: USING AND THROW AWAY. However, the harmful effects of this practice have begun to reflect on our environment. Trillions of waste began to inhabit our planet, polluting soil, rivers, seas, and springs. Soon, people realized that they needed to reverse this logic. The concept of CIRCULAR ECONOMY, in which there is a reuse of products and less generation of waste, began to be disseminated.

In a circular way, our product is part of a closed circuit, in which the used packages are recycled and reused to manufacture new packages.

We are one of the largest producers of recycled paper in Brazil and, to make our production process viable, we have a strategic unit, located in the Northeast, which collects scraps (discarded cardboard waste).

This practice prevents thousands of tons of waste from being thrown adrift in the environment every year. Not to mention that reuse saves the cutting down of thousands of trees that are commonly used to manufacture new packaging.

It is important to stress that recycling also plays an important social role, generating income for people in vulnerable situations. Our wastepaper warehouse has partnerships with cooperatives, associations, and paraphernalia, employing 1,000 to 5,000 people indirectly involved in the process. 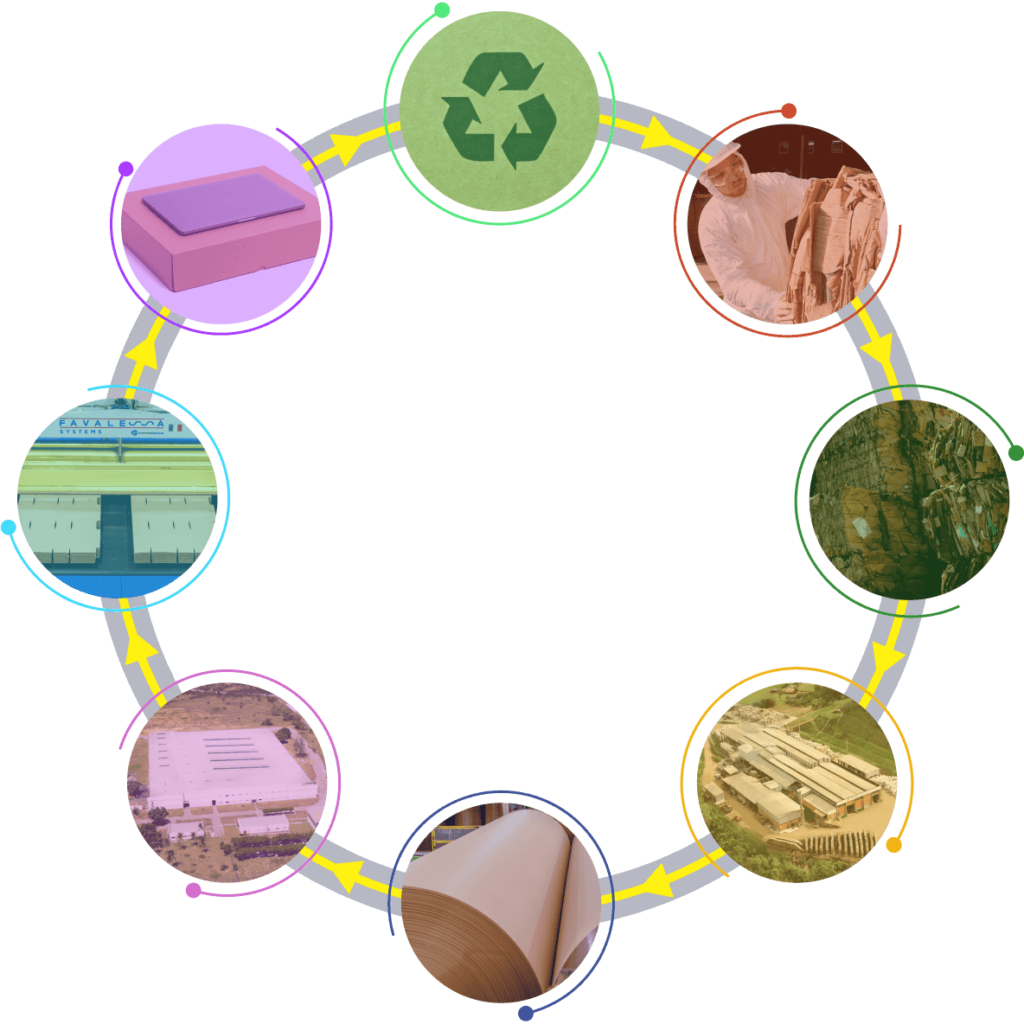 ⚈ After the corrugated cardboard packaging use, our customers throw it correctly, starting the recycling process.

⚈ The recovered paper packaging discarded are collected by our recycling shed: DANSPE.

⚈ After this, they run into a selection process and are forward to papers factories.

⚈ This recycled paper is forward to our packaging factories.

⚈ Counting with technological and modern industrial parks, our packaging units change the paper into sheets.

⚈ These sheets are converted again in packages and receive personalized type, according to the customer’s needs. In this time of the process, the packages are ready to store with safety and quality our customer’s products.

⚈ Our customers receive the packages.

Be the first to know about all Penha Group news.
ⓒ Penha S.A. - All rights reserved

This website uses cookies to improve your experience while you navigate through the website. Out of these, the cookies that are categorized as necessary are stored on your browser as they are essential for the working of basic functionalities of the website. We also use third-party cookies that help us analyze and understand how you use this website. These cookies will be stored in your browser only with your consent. You also have the option to opt-out of these cookies. But opting out of some of these cookies may affect your browsing experience.
Necessary Sempre ativado
Necessary cookies are absolutely essential for the website to function properly. This category only includes cookies that ensures basic functionalities and security features of the website. These cookies do not store any personal information.
Non-necessary
Any cookies that may not be particularly necessary for the website to function and is used specifically to collect user personal data via analytics, ads, other embedded contents are termed as non-necessary cookies. It is mandatory to procure user consent prior to running these cookies on your website.
SALVAR E ACEITAR